Colombo Test: We lost it in the first innings, says Chandimal

Sri Lanka skipper Dinesh Chandimal agreed that his side lost the second Test match after managing only 183 runs in the first innings, in response to India's mammoth 622.

“We were completely outplayed. The first-innings effort was disappointing and it cost us heavily. They batted well too. Scoring 622 is huge, that put us under a lot of pressure. We didn’t think we would get out so cheaply. We were surprised as well because the pitch started turning more than we thought – more than it had in the first one-and-a-half days. The reason we lost the game is because we got out for 183 in the first innings,” admitted Chandimal in a ANI report. 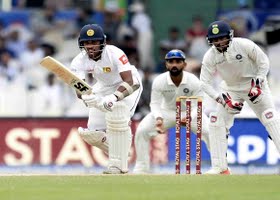 “After yesterday, we had some discussion and in those meetings, we planned about how to go about things today. I still feel that everyone fought very hard but we kept losing wickets. Dimuth played a special innings. As an opener, we expect that kind of innings from him, so we’re very happy he played that innings on a very tough deck like this one,” Chandimal further said in the ANI report.

On Sri Lanka's usage of the sweep shot, Chandimal explained, “After the second day’s play, we felt it was a tough pitch to bat on it. We tried to play straight but we couldn’t score well. Before the second innings, we had a discussion and had a chat about what was the best way to score runs. Everyone agreed that the best way moving forward was by using the sweep and reverse-sweep shots heavily. We executed really well in the second innings.”