Following the comprehensive triumph in Feroz Shah Kotla in Delhi, India claimed the four-match Test series 3-0. Had it not been for the washout at Bangalore, Team India might very well have thrashed South Africa 4-0. While batsmen from both sides struggled in the series, India were the superior side all-round.

Following the comprehensive triumph in Feroz Shah Kotla in Delhi, India claimed the four-match Test series 3-0. Had it not been for the washout at Bangalore, Team India might very well have thrashed South Africa 4-0. While batsmen from both sides struggled in the series, India were the superior side all-round. Undoubtedly, their spin bowling made a huge difference as they were all over the Proteas. But, as the series progressed, India's batting also improved and it all came together at Delhi, where both the batsmen and bowlers shone, as India registered a convincing triumph, one of their biggest ever in their Test history. 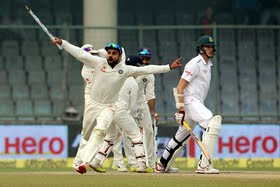 Given that the series was marred by controversies over the spinning and biting pitches, especially the ones at Mohali and Nagpur, not all cricket pundits will look back at this Indian triumph as a resounding victory. But, even if one takes into account that the conditions were heavily loaded in favour of the slow bowlers, the Indian duo of Ravichandran Ashwin and Ravindra Jadeja still need to be given credit for going out there and performing their job. Concluding that they just needed to run in and bowl to get wickets would be an unfair assessment. Both Ashwin and Jadeja bowled with a certain amount of guile to exploit the conditions.

Ashwin was brilliant throughout the series, and deservedly finished as the man of the match. Everytime Virat Kohli needed a wicket, the off-spinner was the go to man for the skipper, and Ashwin rarely disappointed. Not only did he use his variations cunningly, but also ensured that he kept things quiet when the wickets were not coming, thus seeing to it that the pressure remained on the opposition. Ashwin failed to get the better of England in similar conditions under MS Dhoni. So, this success against the world's number one team will definitely taste sweeter for the offie, who is getting wiser with age. Again, he also displayed his usefulness with the bat at Delhi.

Unlike Ashwin, who was the lead spinner from the start, left-arm slow bowler Jadeja was under pressure as he was on a comeback. Not all critics were pleased with the selectors' decision to recall Jadeja just months after he was dropped following a poor international year all-round. But, Jadeja vindicated the faith placed in him by the selectors by putting up a sizzling effort, pretty much on par with that of Ashwin. Jadeja's awkward angles made life difficult for the batsmen, and the drift he generated caught the best of South Africa's batsmen off-guard. In contrast, Amit Mishra was reduced to a supporting role, but he did his bit when needed.

Although the pitches were tough for batting, India should still be disappointed with their overall show with the willow. This is the one major cause of worry that will get dwarfed under the 3-0 euphoria. The fact is that only one batsman, Ajinkya Rahane, got a hundred in the series, and Virat Kohli and Murali Vijay were the only others to come close to reaching the three figures. Shikhar Dhawan's torturous times continued even as he tried to bat with conscious care. Rohit Sharma yet again floundered when given the opportunities while Cheteshwar Pujara could not make an impression either. Even as they celebrate a well-deserved triumph, India must ponder upon these cause of concerns.