How Anil Kumble helped Saqlain Mushtaq get his vision back

Former Pakistan off-spinner Saqlain Mushtaq, in a Live session, revealed how Indian legend Anil Kumble helped him out at a time when he was struggling to find a good doctor in Pakistan for his eye problem. Mushtaq, famous as the man for introducing the ‘doosra’ to world cricket, recalled that during his playing days, he was having a lot of issues with his eyesight. The spinner had consulted a number of prominent doctors in Pakistan, but they could not help him out. Then, Kumble gave the former spinner the reference of a London-based ophthalmologist.

Speaking to Sportstar on Instagram LIVE, Mushtaq termed Kumble his 'elder' brother and said, “We were in England and I told Anil bhai that there are not many good opticians back home, so I am struggling and if he could suggest some ophthalmologists. So, he suggested that I go to Dr. Bharat Rugani. Even he said that he and [Sourav] Ganguly consult him often. He gave me the [contact] number of the doctor and I visited him in Harley Street (in London).” 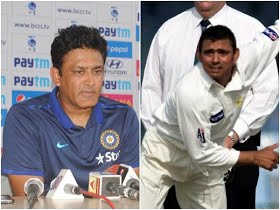 “The doctor checked my eyes and gave me lenses. I had cataract, the vision power was cylindrical and also the eyes were weak. I had consulted many doctors in Pakistan and none could treat it. So, it was Anil bhai who would help me get in touch with the doctor. It was because of him that I could recover. He is a gem of a person,” Mushtaq, who has 208 Test and 288 ODI victims to his name added.

Prior to getting his eyes treated, the spinner used to be very slow in the field, and would react very late to the ball coming his way. “If I [stood] in the boundary while fielding, my anticipation power was zero. That’s why I would be slow and would react late. Now, I can see everything clearly,” Saqlain stated in the interaction.

Singing further praises of Kumble, who holds the record of having claimed all 10 wickets in a Test against Pakistan, revealed that he took a lot of suggestions from the Indian spinner during his playing days, and that Kumble was always willing to help.

“Our culture has taught us to respect elders and Anil bhai is just like my elder brother. Whenever we meet, we have good chats. Even during playing days, you could walk up to him and seek suggestions in the middle of a series. He would help you with the necessary tips and would never misguide it. I have a lot of respect for him,” Mushtaq, who served as England’s spin consultant for two years, and was again hired by ECB for the 2019 World Cup, added.

Mushtaq and Kumble were the leading spinners for their respective teams in the 90s. While Mushtaq was famous for delivering the Test win at Chennai in 1999 dismissing Sachin Tendulkar for 136, his career also ended against India after he finished with unremarkable figures of 1 for 204 from 43 overs in the Multan Test of 2004.