Having been smashed left, right and centre by Chris Gayle on Wednesday night, England will return to the same venue at Mumbai -- the Wankhede Stadium, hoping for better luck against South Africa.

Having been smashed left, right and centre by Chris Gayle on Wednesday night, England will return to the same venue at Mumbai -- the Wankhede Stadium, hoping for better luck against South Africa. The first half of the match saw England compete with West Indies when they were batting. But, the contest tuned into a no-show once Gayle force hit the England bowlers. It was the kind of performance that would demotivate the most optimistic of people. And, England will hardly get time to recover. South Africa though will be themselves searching for some answers even though they beat India in the warm up.

First and foremost, England will need the bowling to pick the pieces after being shredded by Gayle. To be fair to the Englishmen, the West Indian played a spectacular innings, and the dew also made matters worse. Adil Rashid, on whom, England's spin bowling attack rests, had a dreadful time. How he performs against South Africa will now be a massive test of his temperament. England would do well not to drop him after one dreadful game. Moeen Ali was bowling decently until Gayle got stuck into him as well while Ben Stokes was clueless with the ball on the day. Deep inside, they would know they can do much better.

If England want to look for positives from the thrashing against England, it was definitely their batting. Joe Root was mentioned as the key player in the preview, and he lived up to the challenge with a timely 48, devoid of slogging, but at a rate very much acceptable in the T20 format. At the top, Alex Hales batted well after Jason Roy could not contribute much while Jos Buttler got the much needed big hits. Towards the end, skipper Eoin Morgan came up with some spanking strokes to ensure England finished on a high. It wasn't enough, but was impressive nonetheless. England can build on the same.

As for South Africa, as mentioned earlier, they got the better of India in the warm-up. But, the fact is that they go into the series having tasted defeat against Australia. Again, their series prior to that was against England, in which they completely murdered the opponents. AB de Villiers and Hashim Amla finished off that series in blistering style even while displaying their own unique style. They are a strong batting unit without doubt, with big hitters like David Miller and skipper Faf du Plessis. At the same time, the form of JP Duminy and Rilee Rossouw would worry them although the former got some runs against India. Thankfully, they have Quinton de Kock as back up. 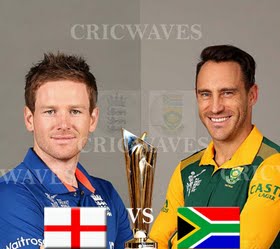 Looking at the struggles of Lasith Malinga, South Africa should not be over enthused with the return of Dale Steyn although the Proteas attack will be even more threatening with his return. In Kagiso Rabada, they have found a bowler who has been constantly winning games for them with the ball. In Steyn's absence, Kyle Abbott also did commendably well. The performance of leggie Imran Tahir too has been highly impressive in recent times, and David Wiese had a rare bad game against Australia. While England would be looking to stay alive in the tournament, the Proteas will be seeking a winning start.