No Indian can ever forget that nail-biting moment when S. Sreesanth got his hands under the ball to ensure Misbah-ul-Haq’s scoop off Joginder Sharma did not touch the ground, and in the process set off celebrations in the Indian camp and all over the country.

No Indian can ever forget that nail-biting moment when S. Sreesanth got his hands under the ball to ensure Misbah-ul-Haq’s scoop off Joginder Sharma did not touch the ground, and in the process set off celebrations in the Indian camp and all over the country. It was a pulsating final, and one the raised the bar in T20 cricket. With the fourth edition of the tournament is all set to get underway in Sri Lanka, here’s revisiting the classic Indo-Pak encounter.

India had made it to the final on the basis of an impressive 15-run win against a strong Australian side at Durban. Pakistan, on the other hand, trounced New Zealand by six wickets at Cape Town. Both sides would have been confident no doubt, but when it’s India versus Pakistan, it is all about handling the pressure – past results don’t matter.

Winning the toss in a final is critical for obvious reasons. M S Dhoni normally wins few tosses, but by some kind of divine intervention, he managed to win this one, possibly the most important one of his career at that period of time. No surprisingly, Dhoni decided to bat first. The objective was to get as many runs as possible on the board, and put Pakistan under pressure, which would anyways be heightened considering the occasion.

This was the innings that gave Gautam Gambhir the belief that he belonged at this level. And what an occasion he chose to demonstrate his talent. The left-handed opener was India’s top scorer, blasting 75 runs from 54 balls, with eight fours and two sixes. It did not matter that India kept losing wickets from the other end, it shouldn’t have, this was a 20-over contest after all. When Gambhir fell at the end of the 18th over, India were 130 for 5. Somebody needed to play a cameo to take India past 150. That innings came from Rohit Sharma. The tall, elegant right-hander found the boundaries with ease during his unbeaten 16-ball 30. Thanks to Sharma’s late blast India reached 157.

Replying to India’s tough target, Pakistan lost their first six wickets for only 77. Mohammad Hafeez, Shoaib Malik and Shahid Afridi all fell in single figure scores. Imran Nazir and Younis Khan got starts but failed to carry on. India were very much on top with R P Singh, Irfan Pathan and even the ungainly looking Joginder Sharma combining to break Pakistan’s back. 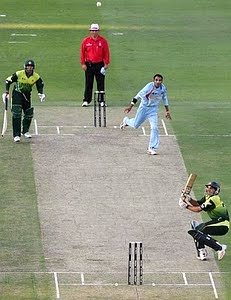 Even as all seemed lost for Pakistan, one man did not give up hope. Misbah-ul-Haq, with help from the lower-order batsman, began a damage control job. In partnership with Yasir Arafat, he took Pakistan to 104. Then, Sohail Tanvir hung around to lift the total to 138 in the 18th over. In the meantime, Misbah smote Harbhajan Singh for three huge sixes tokeep Pakistan in the hunt. Going into the final over, Pakistan needed 13 runs. Dhoni surprised many by giving the ball to Joginder. And when Misbah slapped a full toss for six to long-off, the worries on Indian faces were evident. The match could have gone either way. But, Misbah attempted that fatal scoop that could travel only as far as Sreesanth at short-fine leg. India were delirious, Misbah on his haunches, and Pakistan shattered.