Hosts England entered into the Finals of the ICC Champions Trophy 2013 after a cakewalk victory over the Proteas who yet again choked in a major tournament. It was a disastrous batting show from South Africa that turned the big Semi-Final in a one-sided affair.

Hosts England entered into the Finals of the ICC Champions Trophy 2013 after a cakewalk victory over the Proteas who yet again choked in a major tournament. It was a disastrous batting show from South Africa that turned the big Semi-Final in a one-sided affair. South Africa at one stage were struggling to even get past three digit figures after a dramatic batting collapse from top to bottom.

It was a perfect toss to win for England as the conditions were cloudy and humid. The ball was darting around in the air and off the pitch. James Anderson provided the ideal start by trapping Colin Ingram for a duck with a late inswinger in the very first over of the match. Steven Finn struck in the 2nd over itself getting the big wicket of Hashim Amla who was caught behind when he withdrew his bat pretty late to an away going delivery. 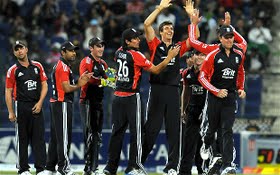 SA seemed to be recovering pretty well as a confident Robin Peterson (30 from 41 balls) at no.3 played some free flowing drives but his show lasted till the 11th over with Jimmy Anderson striking his pads for an lbw with one that straightened from round the sticks. In the 14th over, England got their second biggest wicket with SA Skipper AB de Villiers gone for a 9-ball duck chasing a sucker ball from Broad to get caught behind. South Africa now slipped to 50 for 4!

Off-spinner James Tredwell joined the party in no time to take two quick wickets with JP Duminy chopping a cut onto the stumps and Faf du Plessis (26 from 39 balls) edging a cut shot to the keeper). Tredwell would have got the wicket of Ryan McLaren as well after the left-hander had come down the track and was beaten by the turn and bounce. The ball landed in the hands of Trott at slip who hit the stumps and McLaren according to the rule of the book was given Run Out rather than being Stumped Out which would have otherwise given the credit to Tredwell.

Tredwell did get his official third wicket very soon when Chris Morris nicked his straighter one behind to leave SA on the mat at 80 for 8 in just the 23rd over. Just when England thought the SA innings was done and dusted came the revival for the batting side through a 95-run stand between David Miller and Rory Kleinveldt. The stand was broken in the 39th over when Kleinveldt (43 from 61 balls with 4 fours and a six) was bounced out around the rib cage by Broad. In the next ball, Broad bounced out no.11 Lonwabo Tsotsobe as SA got bundled out for a respectable total of 175 in 38.4 overs. David Miller remained unbeaten with a superb knock of 56 from 51 balls with 5 fours and 2 sixes.

Broad and Tredwell did most of the damage taking three wickets each but the real star was Jimmy Anderson with figures of 8-1-14-2. South Africa thought they had bounced back after removing the English openers – Alastair Cook (caught behind in an attempted pull off Chris Morris) and Ian Bell (caught behind trying to guide Kleinveldt to thirdman).

England at 41 for 2 in 11 overs got through a solid partnership for the 3rd wicket between Jonathan Trott and Joe Root which sealed the match in their favour. Root got out in the 32nd over trying a cheeky lap sweep off Duminy to end up with 48 runs from 71 balls with 7 fours. Trott steered England to a 7-wicket win with 75 balls to spare with his unbeaten knock of 82 from 84 balls with 11 fours. The Man of the Match award interestingly went to James Tredwell as he was responsible in four dismissals early on. The hosts now await either India or Sri Lanka in the Finals which is to be played on the 23rd.

Toss and Teams: Hosts England have won the toss and asked South Africa to bat first in the Semi Final match at The Oval in London. The biggest news of the match is that Dale Steyn misses out because of his side strain and his place has been taken by Rory Kleinveldt. For England, Graeme Swann is out with an injury and Tim Bresnan is on leave for his wife’s delivery. James Tredwell and Steven Finn replace the duo.