Yuvraj recalls the day he hit Broad for six sixes

It has been 10 years since Yuvraj Singh hit Stuart Broad for six sixes in an over. On September 19, 2007

It has been 10 years since Yuvraj Singh hit Stuart Broad for six sixes in an over. On September 19, 2007, in the World T20 game at Durban, Yuvraj’s had hit six sixes off Broad.

At a recent event for Laureus of which he is the brand ambassador, Yuvraj recalled the performance. “The pressure was on him obviously on the sixth ball. I felt it was my day and I knew that the bowler is going to make a mistake and I am going to pounce on it, because anything which I hit was going off the middle of the bat,” Yuvraj said in a PTI report. 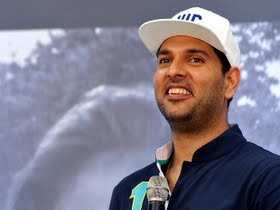 Yuvraj himself was hit for five consecutive sixes by England’s Dimitri Mascarenhas in an One Day International at The Oval. “I remember getting hit for five sixes against England but very few people remember that, so I was happy to give it back,” he replied.

Yuvraj was the star of the 2007 World T20 which India won, and the man of the series in the 2011 ICC Cricket World Cup, again won by India in India. He was recently dropped from the Indian team over form and fitness.