Deccan Chargers as expected have been terminated from the Indian Premier League. The decision to disband the Hyderabad franchise was taken in an emergency IPL Governing Council meeting yesterday.

Deccan Chargers as expected have been terminated from the Indian Premier League. The decision to disband the Hyderabad franchise was taken in an emergency IPL Governing Council meeting yesterday. The Chargers are the second team after Kochi Tuskers Kerala to be terminated from the IPL which has now seen five seasons. The Deccan Chargers owned by Deccan Chronicle Holdings hasn’t done that well in all the seasons except for the 2009 season when they became the Champions of the IPL. 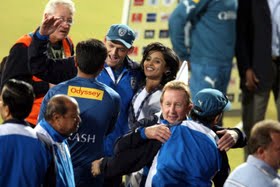 There was hope for the Deccan Chargers to survive but they surprisingly rejected the sole bid to buy them out at Rs. 900 crore from PVP Ventures. Yesterday night though the BCCI had decided enough was enough and now Deccan Chargers is officially history!

The BCCI is now on the lookout for a new IPL team and is going to invite tenders for the same. The Deccan Chargers’ players meanwhile are either likely to be put back in auction or are going to be retained by the new IPL franchise which could emerge in the future.

Below is the Media release from the Sanjay Jadgale, the Honorary Secretary of the BCCI:

BCCI was compelled to hold an emergency meeting of the IPL Governing Council late Friday evening to discuss certain developments due to the Deccan Chargers’ defaults.

Yesterday, despite the Bombay High Court appointing a court officer to act as Observer at the opening of the tender, which was conducted under the aegis of the BCCI to save the beleaguered franchise, Deccan Chronicle Holdings Ltd rejected the bid that was received in the amount of Rs 450 Crores cash and an equal sum in convertible debentures. This was despite the bidder meeting the eligibility criteria of the BCCI.

This evening, BCCI has received a lawyers notice invoking arbitration from the franchise stating that it had not committed any breaches and even if such breaches were committed, the BCCI should not act to terminate the franchise till Yes Bank Ltd furnishes sufficient finance to cure the breaches. By this, Deccan Chronicle Holdings Ltd has clearly admitted its inability to cure itsr breaches within the time stipulated in the BCCI notice despite every bit of assistance from the BCCI. Since the month of May, BCCI has received repeated assurances that the overdue player fees would be paid; all of these promises have been unfulfilled.

The Governing Council took note of the sudden change of stance by the franchise and also the fact that any further extension of time would seriously prejudice the interests of the players.

Considering the stated position of the Deccan franchise to refuse to rectify the various defaults including payments to players, foreign Boards etc, as also the deleterious effect such conduct would have on the reputation of the IPL and the franchise itself, a decision was taken to forthwith terminate the Deccan Chargers franchise.

The BCCI is completely justified in this action which was taken with careful deliberation and only due to the absolute inability of the franchise to effectively run the team.