Check here IPL 6 2013 Venues List. Get IPL 6 Stadiums List with Grounds all over India. IPL Teams will play Home and Away IPL Games.

Sardar Patel Gujarat Stadium, Ahmedabad :
The Sardar Patel Stadium in Ahmedabad can hold a crowd of almost 50,000 and is one of the bigger grounds in the country. Named after India's first Home Minister, Sardar Vallabhbhai Patel, the stadium was built within a span of nine months on a 50-acre stretch of land donated by the government. It is also called the Motera ground because it is located in that area of the city, and has seen many a record being broken. The ground hosted its first Test match in 1983 when West Indies beat the home side by more than 100 runs. Later in the 1984-85 Australia-India series, Sardar Patel Stadium went on to host its first ODI, one in which Australia beat the Indians.

Sunil Gavaskar became the first-ever cricketer to score 10,000 runs in Test cricket on this ground - a feat he achieved against Pakistan. Kapil Dev also surged past Sir Richard Hadlee's record for the most number of wickets in Test matches here, after earlier having made a nine-wicket haul in his career also at the Motera ground. In 1996, the ground hosted a low-scoring Test match against South Africa, where the tourists faltered while chasing a paltry 170 for a win to end up at 105 all out. Javagal Srinath had scalped six wickets in the innings. However, South Africa had their sweet revenge when they bowled India out for 76 runs in the first session of the Test match in 2008 and then went on to win it by an innings and 90 runs. The Motera was also one of the venues for the 2006 edition of the Champions Trophy, with five of the 15 games being played here.

It has also hosted one game in each of the two World Cups that were played in the country, including the first match of the 1996 World Cup between England and New Zealand.

Motera will host four Rajasthan Royals games during the 2010 season of the Indian Premier League.

Famously remembered for hosting Former Pakistan President General Zia-ul-Haq, who crossed across the border to witness a Test match between India and Pakistan and for MS Dhoni's swashbuckling 183* against Sri Lanka, the venue was built during the days of Maharaja Sawai Mansingh II.

In a city that boasts of ancient palaces, forts and the likes, the Sawai Mansingh Stadium, was renovated recently to transform it to a world-class sports facility. The stadium now houses, apart from spacious dressing rooms, good facilities for players and spectators alike, good practice pitches and a lush-green square itself, a cricket academy adjacent to the ground, which now acts as a breeding ground for the next generation cricketers from the city.

After a period of lull, when it did not host any international cricket between 1999 and 2005, the stadium is back on the cricket map. It hosted six matches during the 2006 ICC Champions Trophy, and subsequently hosted a one-day international between India and Pakistan in 2007.

It is also home of the Rajasthan Royals, who won all the seven matches they played there in their run to the title in the inaugural season of the Indian Premier League. 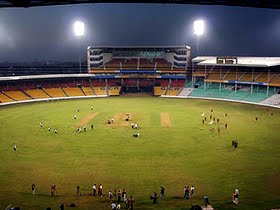 Eden Gardens, Kolkata :
Eden Gardens in Kolkata is easily the biggest cricket ground in the country and one of the biggest grounds in the world. Earlier known to have a capacity of more than a hundred thousand, it can now accommodate 90,000 owing to renovations.

Eden Gardens hosted its first-ever Test match in 1934 when India played England. The Douglas Jardine-led English side managed to draw the game against the Indian side. After five successive draws, Eden Gardens finally saw a result when Australia beat India in 1956.

In 1987, Eden Gardens hosted its first-ever ODI against Pakistan, and India's arch-rivals went on to beat the hosts by a couple of wickets and three balls to spare thanks to Salim Malik's 72 runs off 36 balls. India has played Pakistan thrice on this ground but has yet to win a single game, whereas Pakistan has played here on five occasions and lost only once. South Africa played its first-ever ODI - on their return to the international cricketing fraternity - in 1991, and saw Allan Donald scalp five wickets in a match that was a lost cause. The Proteas were involved in another close encounter in the semi-final of the Hero Cup when Sachin Tendulkar bowled India to a two-run victory thanks to an excellent last over.

India has also seen some good times on this venue. Most notable was the comeback win against the Aussies who had won 16 games in a row and looked set to clinch their 17th. VVS Laxman entered the record books by batting out the fourth day of the game together with his partner, Rahul Dravid, both scoring huge centuries. In the same game, Harbhajan Singh became the first-ever Indian bowler to capture a hat-trick in a Test match.

Eden Gardens will play host to all seven home games for the Kolkata Knight Riders in the 2010 edition of the Indian Premier League. Punjab Cricket Association Stadium, Mohali :
The Punjab Cricket Association Stadium or the PCA is located in Mohali on the outskirts of Chandigarh. Constructed on a swampy land but boasting of world-class facilities, it is one of the better built stadiums in the country thanks to the efforts of former BCCI president IS Bindra. In fact, it is said to be one of the best grounds in the country with respect to the practice facilities, for the spectators and provisions for the media. It has a track that initially assisted pace bowlers, especially in Test matches, but it has subsequently settled down to become a batsman's paradise.

The first-ever game played here was between India and South Africa in the 1993 Hero Cup, and at that time, the track was on the slower side. Even a part-time medium pace bowler like Ajay Jadeja was able to keep the batsmen in check, thanks to the nature of the wicket. However, in the very first Test match that Mohali hosted between India and West Indies, the pace bowlers from the Caribbean ran through the Indian batsmen on the final day to notch up an easy win. In another game against New Zealand, India was shot out for a meagre 83 in their first innings, but went on to achieve a draw after they ended up scoring more than 500 in their second innings.

There have been some exciting ODIs played on this ground too. Two of them dyInclude the Australian side. In the first, Australia managed to beat the West Indies in the semi-final of the 1996 World Cup by a meagre five runs, while in the other one, they were at the receiving end from the Indian side - losing, coincidentally, by five runs.

Mohali is also the home ground of the Kings XI Punjab team in the Indian Premier League and has hosted seven IPL games so far. It will host some of the games for the side in the 2010 version of the tournament as well, along with the Dharmasala in Himachal Pradesh.

Barabati Stadium, Cuttack :
The Barabati Stadium in Cuttack is one of the older grounds in India, having hosted several touring sides - including the MCC, the West Indies team and the Australians - before it hosted its first international match.

In January 1982, the Barabati Stadium became only the third Indian venue to host a One-Day International when India and England locked horns in the decider of a three-match ODI series.

Five years later, the Barabati Stadium's name was also etched on the Test cricket map. Though it isn't one of the regular Test venues anymore, it continues to enjoy the status of international venue and hosts One-Day Internationals regularly.

India have won one of the two Test matches played here, and have a 9-4 win-loss record in ODIs.

The venue is back in the limelight now that the IPL has announced that it will be hosting a few home matches of the Deccan Chargers. 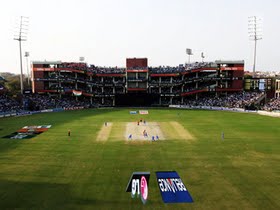 With snow-capped mountains as a backdrop, the Himachal Pradesh Cricket Association (HPCA) Stadium in Dharamsala can claim to be the most picturesque cricket grounds in India. One of the newest venues in India, the stadium is situated about 1457 metres above sea level.

It was dyIncluded on the international cricket map in 2005, when it hosted a warm-up tie between the touring Pakistan team and the Indian Board President's XI. Since then, the HPCA Stadium has played host to a few of Himachal Pradesh's home matches in the Ranji Trophy, apart from hosting a few zonal one-day matches.

With pleasant temperatures in the summer, a lush green outfield and great facilities at the stadium, the HPCA Stadium is also used by the National Cricket Academy to host its zonal cricket camps.

Such is the appeal of the venue that Dav Whatmore, former Director (Operations) of the National Cricket Academy and current Kolkata Knight Riders coach had recommended that it was fit to host one-day internationals thanks to the good outfield and pitch. 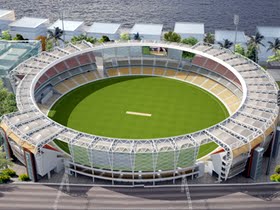