Confidence is not where it was, admits Morgan after England crumble against Australia

After the shock upset to Sri Lanka hosts England suffered another blow to their World Cup qualification chances as they went down to Australia by 64 runs.

After the shock upset to Sri Lanka hosts England suffered another blow to their World Cup qualification chances as they went down to Australia by 64 runs. With three defeats from seven matches, England is yet to secure their position in the semi-final.

The loss against Australia was the third time in this World Cup that they failed chasing. While the early defeat against Pakistan was a definite warning signal for the hosts, the last two losses have exposed a chink in their batting, which was considered among the most dangerous at the start of the World Cup.

England captain Eoin Morgan, however, said the hosts are not cracking under pressure yet, and that their fate is still in their own hands. 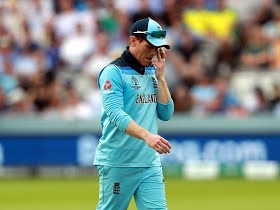 "We are in charge of how we go from here on in. We win two games, we definitely go through," Morgan told Test Match Special according to a BBC report. He added, "It's a matter of producing a performance in one, if not both, of the next two games."

England failed to chase down 233 against Sri Lanka at Headingley before the reverse against Australia at Lord's. Their next two meetings are against unbeaten teams, India and New Zealand, on Sunday and Wednesday respectively.

If they win both games, they automatically qualify. But a loss in one of the games and they will have to depend on results of Sri Lanka, Pakistan and Bangladesh, maybe both.

"Confidence is not where it was at the start of the tournament. I think it's a matter of rebuilding it. India is going to be a tough challenge on Sunday, as is New Zealand. It's a matter of going back to our strengths.

"Normally when we lose games of cricket, we go back to what we do well. We'll still strive to do that for Sunday's game," explained Morgan.

Despite winning the toss and bowling first in helpful conditions, England failed to keep the Aussie openers under check with Aaron Finch coming up with yet another hundred. The hosts fought back to reduce Australia to 285 for 7.

England crumbled in the chase though and quickly found themselves in big trouble at 53 for 4. Despite another valiant effort from Ben Stokes (89), England managed only 221.

"Everything we need to turn around is quite simple. The basics of the game let us down in the last couple of games. Hopefully, we will improve on them moving forward," Morgan concluded.