No, Malinga did not teach me the yorker: Jasprit Bumrah clears the air

Indian pace spearhead Jasprit Bumrah has finally ended the suspense on who taught him the dreaded yorker that has made him world-famous in cricketing circles.

Indian pace spearhead Jasprit Bumrah has finally ended the suspense on who taught him the dreaded yorker that has made him world-famous in cricketing circles. Many believed that Bumrah’s senior partner at Mumbai Indians, Lasith Malinga, helped him perfect the yorker. But, Bumrah has confirmed that is not true.

“Many people believe that he taught me the yorker, but that’s not true. He did not teach me anything on the field. The things I learned from him are about the mind. How to handle different situations. How to not get angry. How to make a plan for a batsman,” Bumrah was quoted as saying in a Hindustan Times interview.

Elaborating further on how he learned to get the ball into the blockhole, the 26-year-old added, “All my cricket I’ve learned from the TV. Even now, I look at videos and I listen to feedback, and then I like to prepare on my own, the way I want to. I try to do the analysis myself. Because on the cricket ground, I will be alone. Nobody’s going to be there to help me so I should be able to help myself.” 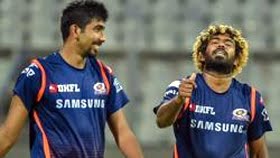 There’s another intriguing tale as to how the renowned Bumrah yorker was born. As a kid, he did not want to trouble his mother while practicing bowling in the corridor. Hence, he tried to avoid the ball bouncing and hitting the wall as it would produce two sounds. Instead, he aimed to hit the edge so that the ball would not bounce.

“If I was not out playing, I was watching cricket on TV. I always enjoyed bowlers, taking wickets, bowling fast, liked watching the stumps, you know, being rattled. I thought ‘I’d like to do that’. In my head, I was Brett Lee, I was bowling like this, I was bowling like that. I was copying my heroes,” Bumrah further said in the Hindustan Times interview.

The Indian pace sensation has been out of action from international cricket since the tour of West Indies last year owing to a stress fracture in his back. He will make a comeback with the three-match T20I series against Sri Lanka at home.

In a career that is still relatively new, Bumrah has four five-wicket hauls in Tests, impressively in four different countries—South Africa, England, Australia and West Indies in 2019—all of it on his first tour.

Bumrah reveals that he is always keen to learn on the go. “I like to learn, I always want to learn new things. I’m always asking people, ‘what do you think I can add?’ I am asking players. I ask the coaches. I keep on adding, keep on adding new things all the time. If I’m going to England, I ask myself, what does James Anderson do? I like to do a lot of homework,” the fast bowler further says, spilling beans on his success secrets.