Standards we're talking about today have been set by myself: Virat Kohli

Team India’s Test skipper Virat Kohli, who has been struggling for big runs for over two years, has underplayed the criticism surrounding him, pointing out that he has made key contributions for the team in the same period. Kohli’s last Test hundred, as has been widely reported by now, came in November 2019. During the same period, Cheteshwar Pujara and Ajinkya Rahane have also struggled for consistency, meaning India’s middle-order has been on thin ice.

Launching a staunch defence of himself, the 33-year-old said, "It's not the first time (my form has come under scrutiny. It's happened a few times in my career - England 2014 was one of those phases. But look, the thing is, I don't look at myself from the lens that the outside world looks at me with, and eventually the standards that we're talking about today, that I'm being compared with, have been set by myself, and more than anyone else, I take a lot of pride in wanting to do the best thing for the team that I can, and wanting to perform regularly for the team, and hence I've been able to do that for a long period of time.” 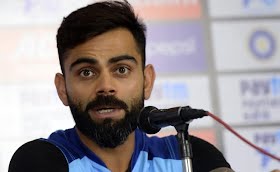 Kohli pointed out that in sport sometimes things do not go the way you want them to go. He added, “But, at the end of the day I realise, as a player, as a batsman, that I've been involved in very important moments for the team over the last calendar year or so, and for me that is a matter of a lot of pride, that I have been part of very important partnerships when the team needed me, and eventually those moments have been crucial for us in many Test matches.”

The veteran cricketer reckoned that sometimes the focal point has to shift. According to him, if all the time you're going to look at yourself and judge yourself on the basis of numbers and milestones, I don't think you'll ever be content or happy with what you're doing. Kohli elaborated while speaking about his performances, “I take a lot of pride and happiness in the process that I'm following, and I'm at peace with how I'm playing and what I'm being able to do for the team when there is a tricky scenario, and as long as I'm doing that, and taking a lot of pride and motivation to be in those moments, I have nothing else to worry about.”

Apart from Pujara, Rahane and Kohli, wicketkeeper-batter Rishabh Pant too has under-performed of late. He came in for massive criticism following his dismissal for a duck trying to slog Kagiso Rabada. Speaking about the stroke, Kohli asserted that Pant would have reflected on the manner he got out. He said, "We've spoken to (Pant) at practice. When a batsman plays a shot and gets out, he knows first of all whether the situation merited that shot or not, and as long as, as an individual, everyone accepts their responsibility, progress will happen.

"We've all made mistakes in our career. We've been dismissed in important situations as the result of our mistake, or because of pressure, or because of the bowler's skill, so it's important to understand what the mindset was at that moment, what was the decision you took, and what was the mistake you made. If you identify those mistakes and accept them, you'll improve, and you'll make sure you don't repeat that mistake.