PW Vs CSK: Pune were completely clueless with bat and ball

When a side loses a T20 clash by a margin of 37 runs, it is not difficult to figure out how one-sided the match would have been. This was exactly the scenario when Pune Warriors took on Chennai Super Kings, at the Subrata Roy Sahara Stadium, Pune.

When a side loses a T20 clash by a margin of 37 runs, it is not difficult to figure out how one-sided the match would have been. This was exactly the scenario when Pune Warriors took on Chennai Super Kings, at the Subrata Roy Sahara Stadium, Pune. But for a reasonably good start with the ball in the first few overs of the game, they were never in the hunt. CSK were well superior to them in all departments and, the end resultjustified the gulf that exists between the two sides.

Chennai got off to a shaky start, losing Michael Hussey and Wriddhiman Saha early, but their depth in the batting department came to the fore once again. Suresh Raina and Subramaniam Badrinath are now veterans at handling such situations in the IPL. It showed in their partnership, as they complemented each other very well en route to rebuilding the innings. As expected, Badrinath rotated the strike frequently by placing the ball in the gaps. The left-hander Raina, on the other hand, ensured that the big strokes kept coming from his end at regular intervals so that the run rate didn’t drop too much. 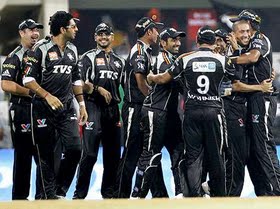 Although the partnership was going well, the dismissal of Badrinath was a blessing in disguise for Chennai. Not matter how hard he tried, Badrinathcouldn’t have delivered that MS Dhoni did after arriving in the middle. Until the Badrinath-Raina combo was at the crease, Chennai were looking at a decent total. But, once Dhoni came into the picture things changed completely. It was his regulation slog overs feast that lifted Chennai to a competitive total. Not matter how many times he does it, Dhoni’s sensational hits at the death continue to amaze. Tuesday was not different.

Pune suffered in the bowling department since only a couple of them managed to restrict Chennai’s flourishing batsmen. Bhuvneshwar Kumar once again showed his class, conceding only six runs an over, while Rahul Sharma was equally good, going at just a little over six. Ashok Dinda, however, went for plenty, and his poor bowling helped Chennai recover well very from the early losses. Kane Richardson was strictly alright but Abhishek Nayar and Luke Wright did not do much to help the struggling Pune’s cause. Thus, they ended up giving a few too many that they would have liked.

Batting hasn’t been Pune’s stronger suit this season, and their weaknesses were exposed once again. The hosts did not help their cause, losing two big wickets to run outs – Robin Uthappa and Luke Wright, although it must be said the latter was extremely unlucky. Having said that, Pune were indeed poor with the bat. None of their top or middle order batsmen showed the inclination to stay at the crease. Steven Smith was the only one who hung around, but his knock only delayed the inevitable. Another extremely forgettable showing by Pune.

Turning point of the game: Dhoni’s unbeaten 45 off 16 balls, which took the fight out of Pune.