The unsung New Zealanders went onto take an unassailable 2-0 lead over hosts South Africa in their 3-match ODI Series. South Africa suffered with a team that had so little experience and led by Faf du Plessis who was still establishing himself as an international player.

The unsung New Zealanders went onto take an unassailable 2-0 lead over hosts South Africa in their 3-match ODI Series. South Africa suffered with a team that had so little experience and led by Faf du Plessis who was still establishing himself as an international player. As many as five run outs took place in the South African run chase of 280 which paved way for a thrilling Kiwi win which was earlier set up by a superb century from young gun Kane Williamson.

Asked to bat first after losing the toss under bright sunny conditions, New Zealand were crawling at 32 for 2 in the 13th over before Grant Elliot joined Kane Williamson to lay the foundation with a big stand. Eliott scored 48 (from 63 balls with 5 fours) in a 127-run stand with Williamson, who went onto score his 3rd ODI century in 100 balls. New Zealand had a mini collapse slipping from 188 for 3 to 211 for 7 in the 42nd over and were heading towards a below par total. 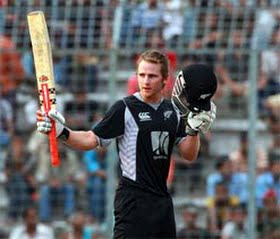 Fortunately for the Kiwis, Kane Williamson battled through despite cramping up and with support from Nathan McCullum and Kyle Mills, pushed the total to 279 for 8 out of nowhere. Williamson who came into bat in the third over remained unbeaten with a career best of 145 (from 136 balls with 17 fours and a six). For the Proteas, Morne Morkel took three wickets but also gave away 71 runs in his 10 overs. Lonwabo Tsotsobe was good for his 10-2-38-2.

The run chase was nicely set up by a second wicket stand between former Captain Graeme Smith (66 from 75 balls with 8 fours) and no.3 Colin Ingram (79 from 94 balls with 10 fours). The pair’s century stand took SA to 167 for 2 in the 31st over before Smith ran himself out trying to steal a risky third run. Skipper Faf du Plessis then got run out and a little later, Colin Ingram trying to release the pressure got out attempting a big hit off Nathan McCullum.

New Zealand cleverly stifled the scoring rate with some tight bowling backed up by excellent fielding while the required run rate slipped away from the Proteas. Farhaan Behardien was left alone to do a miracle for the Proteas on his ODI debut. The young man scored 31 from 40 balls before he too was run out. South Africa were bowled out for 252 in 49.1 overs. Kyle Mills had a great evening taking 2 for 28 in 9 overs. Undoubtedly the Man of the Match was Kane Williamson for his great century.