After stupendous comeback century in first Ashes Test, Wade says 'it's yet to sink in'

When Matthew Wade was dropped from the Aussie squad in 2017, his international career appeared over as he had been failing constantly. However,

When Matthew Wade was dropped from the Aussie squad in 2017, his international career appeared over as he had been failing constantly. However, runs in domestic cricket meant the sectors were obliged to give him another chance and the Aussie keeper-batsman repaid the faith with a splendid hundred on Day 4 of the first Ashes Test.
Wade made a handsome 110 came from 143 deliveries with 17 boundaries and along with yet another ton from Steve Smith capped a turnaround for Australia in the match at Edgbaston.
Speaking about his innings following the end of day's play, Wade said it was like a dream come true for him. “The first Test match of an Ashes series, to play was a dream come true, let alone to contribute to what we’re hoping will be a win,” Wade said. “It probably won’t sink in until maybe after the game or a few days when we’re playing a tour game," he added. 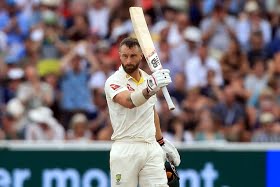 Wade added he was confident of doing well in the second innings despite falling early to Chris Woakes in the first innings, trapped in front of the wickets. “I’m confident in my game, and if it doesn’t work I still feel that on my day I’m good enough to score runs and I’m not chasing my tail as much as what I did when I was a younger player,” Wade said.


“I certainly felt my game was at a stage where I can perform at this level. It’s as confident as I’ve been coming into a Test match for sure. That’s the way we want it to be in Australia, we want guys piling on a lot of runs at first class level to get an opportunity to play Test cricket," the veteran further added.


Wade also said it was special to have captain Tim Paine at the other end when he got that hundred. The keeper and the captain grew up in the same place and attended primary school together as well.


“Me and Tim grew up in a small little suburb called Lauderdale, 20 minutes out of Hobart. We’ve had a few backyard Test matches, but it was nice to be out there in the middle playing a real one today," the batsman stated.


Wade also thanked his wife Julia who was pregnant and opted to ve inducted so he could be ar birth before joining the Australia A squad. “I’m grateful to be here and I’m even more grateful for my wife throwing me on the plane and telling me to come over and play the Australia A series to hopefully get an opportunity to be in the position I am," Wade further said.