Spotlight: Rahane proves he is a man for all conditions

There are no two ways about it that Ajinkya Rahane made his Test debut a few seasons later than he should have. This was perhaps the reason why he was extremely nervous on his Test debut, which came in March 2013 against Australia at Delhi

There are no two ways about it that Ajinkya Rahane made his Test debut a few seasons later than he should have. This was perhaps the reason why he was extremely nervous on his Test debut, which came in March 2013 against Australia at Delhi. Rahane made only 7 and 1, playing an atrocious heave in the second innings even as India won the Test easily. Life came a full circle for Rahane when he returned to the same venue where he made his debut more than two years back, and registered a hundred in each innings, becoming only the fifth Indian to do so.

In between his debut at Delhi and his return to the same venue against South Africa, Rahane tasted most of his success away from home. And, it was not due to his fault since he played all their Test matches away from India in this period. And so, when Rahane returned to home conditions for the first Test against the Proteas at Mohali, it was almost a given that he would succeed. Somehow, he didn’t. He had a miserable time going into the final Test at Kotla, having scored only 15 and 2 at Mohali and 13 and 9 at Nagpur. 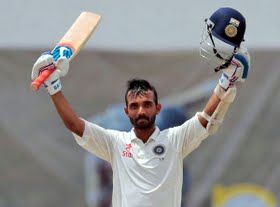 When the teams moved to Delhi, there was a certain aspect of curiosity over Rahane’s failures at home. Some critics even felt that Rahane had a weakness against the turning ball. But, the Mumbai batsman set the record straight in the Indian capital. He played two mature knocks, which have put India in a position of strength to go for a 3-0 triumph in the series. In both innings of the Test, India were in a bit of pressure having lost early wickets. But, Rahane held the innings together nicely, defending with purpose when the team needed, and attacking when the situation demanded.

Rahane’s twin tons, in a way, have marked the coming of age of the batsman very early in his career. But, from what we has seen so far, across 20-odd Tests, he has proved that he is a man for all conditions. Even in his short career thus far, he has featured in Tests across the globe and has proved his worth. His numbers itself tell the story of his success. It all began in South Africa, where he made 47 at Johannesburg, and 51 not out and 96 at Durban even as India went down.

South Africa was only the beginning of greater things to come. In his very first visit to New Zealand, he registered a hundred at Wellington. In England, it was his near-perfect hundred at Lord’s at set up a memorable win for India. He got a splendid 147 in Melbourne as well, apart from two fifties and a couple of other significant knocks. In the Test at Fatullah, Rahane narrowly missed out on a hundred as India went for quick runs. He was promoted to number three at Sri Lanka, and although his technique was tested, he still managed a ton at the SSC.

Clearly, a great in the making. Whether he lives up to the billing, only time will tell.