Pakistan went into the clash against Bangladesh low on confidence. Their batting going into the tournament was particularly poor. But, on Wednesday at the Eden Gardens in Kolkata, they came to the party, and demonstrated that Bangladesh still have some work to do before they can claim superiority over their big brothers in international cricket

Pakistan went into the clash against Bangladesh low on confidence. Their batting going into the tournament was particularly poor. But, on Wednesday at the Eden Gardens in Kolkata, they came to the party, and demonstrated that Bangladesh still have some work to do before they can claim superiority over their big brothers in international cricket. Batting first in their opener, Bangladesh amassed a massive 201 for 5, courtesy fifties from Ahmed Shehzad and Mohammad Hafeez and a blistering 19-ball 49 from Shahid Afridi. Their bowlers then chipped in and, despite a half-century from Shakib Al Hasan, Bangladesh fell 55 short.

Pakistan, this time, opened with Ahmed and Sharjeel Khan, their fourth different combination in T20s this year. And, the change finally worked as Khan was successful in hitting the usually impressive Al-Amin Hossain for two sixes and a boundary in the second over of the match. That set Pakistan on their own. And, even though Arafat Sunny got the better of Khan soon after, Pakistan continued to march ahead. The second ball Hafeez faced was smashed down the ground for a straight six. Shehzad also joined in the act very soon. 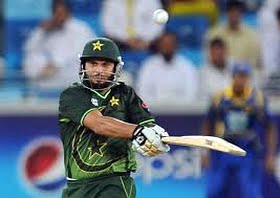 Shehzad began with a pleasing cover drive off Taskin Ahmed's bowling in the first over, and then got another four through midwicket off the same bowler. Not long after, he smashed Sunny over extra cover while Hafeez blasted more fours down the ground. Hafeez and Shehzad went head-to-head in the partnership, but Shehzad went on to complete his fifty, needing 35 balls to get there. He eventually fell for 52 from 39 balls, when he pulled Sabbir Rahman to deep midwicket, having hit eight fours. The partnership for the second wicket was worth 95.

With the stage set, Afridi walked in at number four. He blasted Mashrafe Mortaza, for two fours and a six as runs came in that over. The next over bowled by Al-Amin also went for equal number of runs as Hafeez and Afridi continued to toy with the Bangladesh bowling attack. Hafeez was eventually dismissed for 64 from 42 balls, smartly caught by Soumya Sarkar at the deep midwicket boundary. It was the now familiar move of lobbing the ball back into play while crossing the ropes, and coming back to hold it. Afridi continued his smashing ways against Shakib as well, and holed out to deep square leg one short of a fifty, at a strike rate of 258.

Mohammad Amir then continued his famous comeback to international cricket, having Sarkar's off stump uprooted three balls into the chase. Sabbir Rahman punched a few well timed fours before being cleaned up by Afridi. But, the biggest setback for Bangladesh came when Tamim Iqbal dispatched one into midwicket’s hands, having hit a couple of sixes in his 24. Shakib held one end up till the end, but the result had become a formality.