Runners up in the last two editions, Sri Lanka had a mixed tournament, where they progressed to the knockouts on a high, but were outdone by South Africa in the quarters. Here is their report card.

Tillakaratne Dilshan (7/10): The veteran opener had a good tournament scoring runs consistently, including a century. He finished with a tally of 395 runs. But, got a blob in the quarter finals. 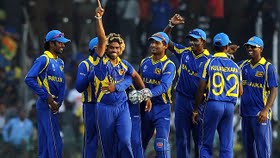 Lahiru Thirimanne (6/10): He utilised his opportunity at the top of the order, with a century and a fifty apart from starts. He was looking good in the quarters before he gave it away, ending with 302 runs from the World Cup.

Kumar Sangakkara (9/10): What was memorable farewell Sangakkara had with four hundreds in as many games. He was Sri Lanka's leading run-scorer with 541 runs, but played a bizarre knock in the quarters, getting stuck at one end.

Mahela Jayawardene (3/10): Take out the 100 against Afghanistan, and Jayawardene had a forgettable swansong. He managed poor returns of 125 runs from the World Cup.

Angelo Mathews (4/10): The all-rounder and skipper had a poor series with bat and ball. He totalled only 195 runs to go with his 6 wickets.

Thisara Perera (2/10): The big-hitting all-rounder's limitations were exposed on the big stage. 62 runs and 6 wickets was all he managed in the World Cup.

Suranga Lakmal (3/10): He was easily picked away for runs owing to lack of experience and accuracy. Lakmal had seven wickets at 6.21.

Rangana Herath (3/10): The injury to the left-arm spinner hampered Sri Lanka massively. Herath only managed 3 wickets in the games he played at an economy of 4.61.

Nuwan Kulasekara (1/10): He had an extremely poor World Cup, and had to be dropped after the first couple of games. He had 4 wickets at 6.53.