Did you know that Ray Price, the Zimbabwean left arm spinner is partially deaf in one ear? Born prematurely, Price came up against all the odds to become what he is today!

One of the many cricketers born on the 12th of June is Ray Price, who turns 36 today. He may not be a huge name in the world of cricket, but of late has been getting plenty of respect from the opposition batsmen. Ray Price is a left-arm spinner, who has this ability of bowling with the new ball in ODIs and T20Is and is perfectly capable of holding his own even against attacking batsmen at the top. Price hardly gives anything away to the batsman and quite successfully strangles them up with his tight left arm spinners.

The story of Raymond Price is really interesting. Ray is the nephew of Nick Price, once considered as the Best Golf player in the World. Coming back to the story of Ray Price, it is indeed interesting and at the same time an inspiring one. Firstly, he was born two months prematurely and had only 25% of surviving following that! Although Ray survived that big scare, even today he suffers from his premature birth. As of now, Ray Price suffers from partial hearing in one ear. 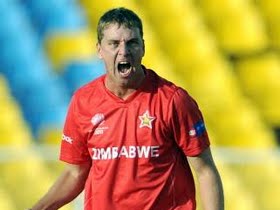 As a baby, Ray Price was totally deaf after contracting meningitis (a health condition in which the brain and spinal cord are affected). At the age of four, Ray was operated to get rid of the deafness but was left with another problem! After his surgery, Ray struggled with co-ordination problems and wasn’t at par with kids of his age.

As he grew up, Ray Price took up Cricket and at the same time got trained as a Technician dealing with refrigeration and air conditioning units. By 1995/96, Ray Price got into first class cricket representing Mashonaland County Districts and in 1999 made his Test Debut at Harare against Sri Lanka. In the next four years, Price began to establish himself as a respectable spinner. However, his career was cut short around 2003 and 2004 because of the political disturbances in Zimbabwe and the disruption of the national team. Price flew to the UK where he played for Worcestershire and began to dream of playing International Cricket for England after meeting the necessary qualifications.

Ray Price again gave a twist to his career when he came back to Zimbabwe in 2007 and soon got back in the national squad after the World Cup. Since that, Ray Price has been a regular part of the Zimbabwean team. After Tatenda Taibu, Ray Price became the only Zimbabwean player to get an IPL contract which was offered by Mumbai Indians.