Led by Virat Kohli, India will be playing their fourth Champions Trophy final while Pakistan, having already lost to India in the league matches, their first-ever tournament decider. 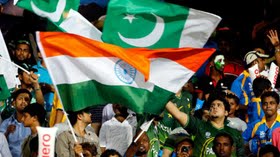 Although Pakistan have an overall lead in the head-to-head stakes, having won 72 matches to India's 52, they have lost eight of the 10 matches the teams have played in global tournaments. In the Champions Trophy tally both teams won 2.

Junaid Khan has taken eight wickets at an average of 21.50 in five matches against India.