Tendulkar backs Kuldeep to shine in Tests in England

Kuldeep Yadav has had an impressive run in England so far, and India legend Sachin Tendulkar believes the youngster is ready to compete in Test cricket

Kuldeep Yadav has had an impressive run in England so far, and India legend Sachin Tendulkar believes the youngster is ready to compete in Test cricket.

"I have always maintained that he’s ready for the longest version of the game and that will be the most challenging one. I think he’s ready," Tendulkar told Reuters in an interview, according to ICC.

Yadav claimed a five-wicket haul in the T20s and a six-wicket haul in the ODIs, but England batsmen played him better in the one-dayers to win the series. Yadav managed only3/68 and 0/55 in the last two games. "Looking at his repertoire, he has the capability to go there and compete, without any doubt," Tendulkar however added. 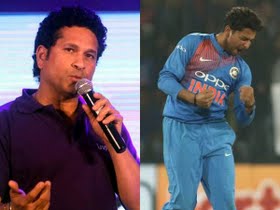 "The English summer is pretty warm this time. If there’s a bit of help for our spinners then I am sure we will be in a position in the series to hurt them. That will be a critical factor," the India great went on to explain.