Bangladesh’s joy of registering their highest ever total of 556 was short lived as they lost the opening Test at Mirpur on the final day by a comprehensive margin of 77 runs.

Bangladesh’s joy of registering their highest ever total of 556 was short lived as they lost the opening Test at Mirpur on the final day by a comprehensive margin of 77 runs. This was despite the West Indies leaving them a modest target of 245 in two and a half session.

The match was interestingly poised with West Indies having a lead of only 215 runs with 4 wickets in hand when the final day started. West Indies could only add 29 more runs before getting all out although the unwell Shivnarine Chanderpaul did come out to bat at no.11 but only to last four balls. Debutant off-spinner Sohag Gazi was the hero for the hosts taking 6 for 74 in 23.2 overs. 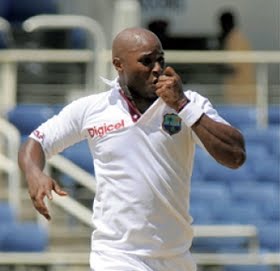 Bangladesh were on the backfoot early in the run chase losing their star batsman Tamim Iqbal cheaply. In the post lunch session, Bangladesh were sinking towards defeat at 129 for 7 and in the final session, the match was wrapped up with fast bowler Tino Best taking 5 for 24 in 12.3 overs. Debutant left-arm spinner Veerasammy Permaul chipped in with three wickets in just 8 overs.

None of the Bangladeshi batsmen who flayed the West Indian attack in the first innings could come good in the run chase. The hosts were bundled out for 167 in 54.3 overs. West Indian opening batsman Kieran Powell for scoring a century in each of the innings got the Man of the Match award.