Former Zimbabwe all-rounder and coach Kevin Curran has died at the age of 53 in Mutare.

Former Zimbabwe all-rounder and coach Kevin Curran has died at the age of 53 in Mutare. 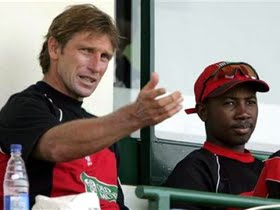 He was also in charge of the Zimbabwe Academy and the Mashonaland Eagles before his death. The Eagles' next two matches have been postponed as a mark of respect.

He retired in 1999, coaching Namibia before taking on the Zimbabwe job.