Pakistan held onto a 13-run win over New Zealand in the Group D Match at Pallekele. Despite the defeat, New Zealand have done enough to ease into the Super Eights.

Pakistan held onto a 13-run win over New Zealand in the Group D Match at Pallekele. Despite the defeat, New Zealand have done enough to ease into the Super Eights.

Needing 178 runs to win from 20 Overs, New Zealand were in a nice shape early on with opener Rob Nicol scoring 33 (from 28 balls with 3 fours and a six). However, the Kiwis lost their way against the Pakistani spinners. Brendon McCullum, who scored a superb century against Bangladesh struggled to get going straightaway and the Kiwis’ decision to promote Daniel Vettori (18 from 16 balls) proved to be disaster. Brendon McCullum perished in the 16th over after a slow 32 from 31 balls which left the Kiwis at 108 for 4. 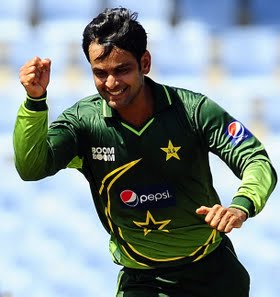 There was just too much to get for Skipper Ross Taylor towards the end. The New Zealand Skipper was looking dangerous striking 3 fours and a six in his 11-ball 26 off Saeed Ajmal but his run out in the penultimate over sealed the game for Pakistan. The Kiwis eventually finished well short at 164 for 9. Like always Saeed Ajmal got amongst the wickets, taking 4 for 30 in 4 overs. The man who was mainly responsible for the Pakistani victory was none other than Mohammad Hafeez, the Skipper who scored 43 and then followed it up with mean figures of 4-0-15-0! Nasir Jamshed got the Man of the Match award for his wonderful fifty.

Pakistan Innings: Pakistan finished on a high at 177 for 6 in their Group D match at Pallekele. The Pakistanis had a great start but slowed down in the middle overs but the final two overs were extremely good to take them to a high total.

Skipper Mohamamd Hafeez, who was dropped by his counterpart Ross Taylor early in the innings, went onto punish the Kiwis with a knock of 43 (from 38 balls with 2 fours and 2 sixes). It was youngster Nasir Jamshed who was the star of the Pakistani batting scoring a superb 56 from 35 balls (with 2 fours and 4 sixes). Umar Akmal with 23 from 15 balls gave Pakistan a decent finish.

For the Kiwis, Daniel Vettori bowled on a tight leash with figures of 4-0-23-1. Tim Southee was also pretty good for his 2 for 31 in 4 overs.

Toss and Teams: Pakistan have won the toss and elected to bat first in the Group D Match against New Zealand at Pallekele. New Zealand are almost through into the Super Eights following their big victory over Bangladesh. Pakistan on the other hand are playing their first match of the tournament and will be looking to win here so that they would not be under too much of pressure facing Bangladesh later on.

New Zealand have made one change to their line up with fast bowler Adam Milne replacing the injured Martin Guptill. Pakistan have preferred to play Yasir Arafat ahead of Abdul Razzaq.