England opener Jason Roy smashed a stroke-filled 78 from merely 44 balls, an innings studded with 11 fours and two sixes, as New Zealand’s undefeated run in the 2016 World T20 came to an end with a seven-wicket thrashing in the first semi-final at the Feroz Shah Kotla on Wednesday

England opener Jason Roy smashed a stroke-filled 78 from merely 44 balls, an innings studded with 11 fours and two sixes, as New Zealand’s undefeated run in the 2016 World T20 came to an end with a seven-wicket thrashing in the first semi-final at the Feroz Shah Kotla on Wednesday. Thanks to some spectacular death bowling by Chris Jordan and Ben Stokes, New Zealand were restricted to a disappointing 153 for 8 in their 20 overs. Roy then came out all guns blazing, and was the dominant partner in the 82-run opening wicket stand with Alex Hales (20). Jos Buttler came in and finished off the match with some big sixes, as Joe Root enjoyed the action from the other end.

England got off to a spectacular start in the chase, as Roy smashed Corey Anderson for four fours in the opening over. He began by driving one past square cover, and followed it up with boundaries through fine leg, slip and the gap between backward point and short third man. It set England on their way. Hales joined in the act by blazing Mitchell McClenghan for a six over long-on. When Adam Milne came on, Roy top-edged a six over long-off. Mitchell Santner too was dispatched with ease. By the time Roy was dismissed, England had raced to 110 for 2 in the 13th over. Buttler then came in, and had fun. 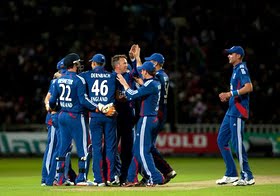 Earlier, England’s bowlers came up with a superb bowling performance in the second half of the innings to restrict the Kiwis, after winning the toss and deciding to bowl first. At one stage, New Zealand were brilliantly placed at 91 for 1 in the 11th over, when Kiwi skipper Kane Williamson was dismissed for 32 from 28 balls. From that point onwards, England gained the ascendancy. They gave away merely 64 runs in the last 10 overs, and just 20 in the last four, as New Zealand frittered away. They lost seven wickets, including Williamson, starting from the 11th over.

After Martin Guptill fell early, Williamson and Colin Munro featured in a second wicket partnership of 74 at a fast clip. But, Moeen Ali got Williamson to chip one straight up in the air and caught the Kiwi captain himself, getting under the ball. A few overs later, Munro, on 46, sliced Liam Plunkett straight to Ali at third man. New Zealand were losing their way, and needed the experience of Ross Taylor to see them through the tough period. But, he heaved Jordan straight up in the air. At the end of 17 overs, New Zealand had slipped to 136 for 4.

The worse was only to follow for the Kiwis. Stokes got back-to-back wickets with full tosses, as Luke Ronchi and Corey Anderson perished in the deep, trying to clear the field. Stokes and Jordan bowled some brilliant yorkers, and just did not allow the batsmen to get under the ball. Only one boundary was conceded between the 17th and the 20th over. The end in stark contrast to the start New Zealand got. After Guptill nicked David Willey behind, Kiwis teed off. Munro blasted Plunkett for three consecutive fours, while Williamson launched Stokes for a six over long-off. They put New Zealand in the ascendancy before England fought back brilliantly.