The Chennai Super Kings looked like the winning team for more than 25 overs in the match, but struggled to make it count when the time came to close out as a middle order collapse handed KKR what could have been easy yet crucial points to the Kolkata Knight Riders.

After receiving severe criticism on deciding the batting order, Dinesh Karthik seemed to have overcorrected this time. He sent Tripathi to open with Gill, Narine came in at number four, Morgan at five, and the skipper himself at seven ! Nevertheless, the openers gave them a decent start after a few quiet overs initially. Gill threw his wicket away but Tripathi was looking in some fine touch, and was finding the boundaries on a regular basis. Nitish Rana came and went as comeback man Karn Sharma picked up his first. Narine, batting at a strange position, followed his same approach as he struck a six and a four off Bravo, before perishing against Karn courtesy a shared catch between Jadeja and du Plessis. 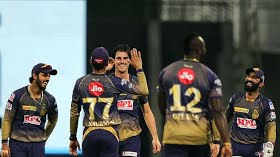 At 98-3 with 9 overs remaining, KKR had just the ammunition to go big with Morgan, Russell, DK, alongside a well set Tripathi, who had already gotten to his fifty. Ironically, it was then only that they lost the plot. First Sam Curran got his national skipper Morgan, then Russell too got out cheaply. Tripathi, who made a quality 81, then perished to Bravo, giving the former WI captain his first wicket in this year’s IPL. DK and Cummins slogged a few as KKR finished at 167.

CSK would have certainly fancied themselves to overcome this par total posted by KKR, given the last game they played. After maintaining at least one boundary each over, Faf threw his hands at a widish delivery off Mavi in the 4th over, only to edge it behind. Rayudu and Watson then batted sensibly as Cummins bowled out his 4 inside the team’s 11 overs.

Requiring a modest 74 off 9 overs with 9 wickets in hand, not many would have favoured KKR at that point. But it was certainly no ordinary night as Watson’s wicket triggered a collapse. Rayudu hit one straight to long on as the junior Curran joined MS at the crease. Both the batsmen tried to take risks as the required rate was rising, but Varun Chakravarthy came back to bowl Dhoni, and Russell picked up Curran with his first ball. Requiring 26 off the final over, Kedar Jadhav struggled to middle the first 3 balls but Jadeja slammed six, four, and four off the final 3 balls, though it was too little too late, as CSK lost the match by 10 runs.