Galle Test: Sri Lanka utilised their strengths to the hilt

The Galle Test began with Sri Lanka having asserted their supremacy over the Australians at Pallekele in spite of being rolled over for 117 on the first day of the series. In the second Test, they were in absolute control from day one, and needed only two-and-a-half days to hand Australia one of their most embarrassing thrashings. On a difficult pitch for batting, Sri Lanka crossed the 230 mark in both innings while Australia failed to get close to 200. That striking stat was the chief difference between the two teams.

Spin has always been Sri Lanka’s strength at home. They backed their forte, and the results came. Significantly, the players who were expected to deliver, and even those who weren’t, put their hands up. Going into the Test, it was Rangana Herath who was expected to cause major damage as far as Australia were concerned. And while, he again shone, picking up a hat-trick in the first innings, it was Dilruwan Perera, who stood out. He claimed ten wickets in the innings, bamboozling the Australians, who were clueless as to which was the ball will turn, or whether it will turn at all. 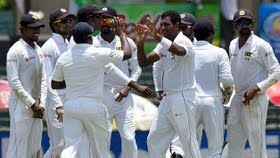 Perera not only shone with the ball, but chipped in with the bat as well. The victory margin of 229 runs notwithstanding, his second-innings 64 was crucial in shutting Australia out of the contest altogether. As mentioned earlier, Herath also played his part, picking up a hat-trick in the first innings, and chipping in with a couple in the second. So good were Perera and Herath, Sri Lanka hardly needed the services of the third spinner Lakshan Sandakan, who himself was a big threat to the Aussies at Pallekele. The pacers too weren’t called into action in the second innings.

Sri Lanka’s batsmen also played their part in the win although their efforts were overshadowed by the spinners. Kusal Mendis again stood up, making 86 in the first innings. Skipper Angelo Mathews also played his part, with a half-century in the first innings, and 47 in the second. There were contributions all round from the likes of Kusal Perera and Dhananjaya de Silva. All these factors combined to further Sri Lanka’s advantage. The most impressive aspect of Sri Lanka’s performance was that the younger men but their hands up.

As for Australia, their batting was clearly found short. Considering the lack of experience in the middle order, the veteran duo of David Warner and Steven Smith needed to stand up. But, while they kept getting starts, they failed to convert the same. They should be extremely disappointed with their efforts. The likes of Usman Khawja, Joe Burns, Adam Voges and Mitchell Marsh, all of whom had done very well in familiar conditions have been found out on the spinning tracks of Sri Lanka. It has been a rather rude awakening for Australia, the number one Test team. They have now lost eight Tests in a row in Asia. Perhaps, it is time to spare sub-continent sides some slack for failing abroad.