ODI world champions Australia will take on hosts and T20 champions West Indies in the final of the tri-series on Sunday. Australia were the first team to secure their place in the final by chasing down a 280 plus total with ease in their last league match.

ODI world champions Australia will take on hosts and T20 champions West Indies in the final of the tri-series on Sunday. Australia were the first team to secure their place in the final by chasing down a 280 plus total with ease in their last league match. That left West Indies and South Africa needing to win their last game against each other, to confirm their place in the summit clash. While West Indies lifted their game under pressure, the Proteas, not for the first time in their history, crumbled in a crunch situation. And so, it is now down to Australia and West Indies, who will battle it out to lift the crown.

While Australia undoubtedly go in as favourites, having a great record in finals of multi-nation tournaments, this is a team that has its frailties, unlike the invincible sides of the past. They have a few match-winners who, if they fail, cause a lot of trouble to the side. This is what West Indies exposed earlier in a league match when they overcame the Aussies. In fact, South Africa too beat them once out of the two times they met in the tournament. So, it is not as if Australia have progressed to the final without any hiccup. It is this perceivable weakness that the hosts will look to exploit in the final.

The experienced men in the side, and there are quite a few of them, will have to stand up for Australia on the big day. With the bat, a lot will be expected of skipper Steven Smith. He is someone who generally rises to the occasion, and will be eager for the challenge. The openers in Aaron Finch and Usman Khawaja will also be expected to fire. George Bailey keeps his place and remains a crucial member of the batting unit. The all-round services of Mitchell Marsh have come in handy, of late, for Australia. In the bowling department, Mitchell Starc will be the key.

While West Indies would be buoyed by the victory over South Africa, they will definitely face a greater challenge when they take on Australia in the final. They will be under big pressure being hosts. Also, West Indies, this year, have won the World T20, the Women's World T20 and the U19 World Cup. So, it is not as if there won't be expectations from the hosts. A win will give a massive boost to West Indies skipper Jason Holder's confidence. Remember, the T20 triumph came under Darren Sammy's leadership. As mentioned earlier, the current Aussie outfit is not invincible, so West Indies must keep the self belief. 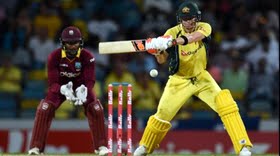 Marlon Samuels will have a huge role to play if West Indies hope to lift the title. The experienced batsman has scored a 90 and a hundred the last times these two sides met. So, he would be brimming with confidence. Further, Kieron Pollard has played a couple of handy knocks so he's in form as well. Darren Bravo too goes into the final with a hundred against his name in the do-or-die clash against South Africa. The openers will need to lift their game though. In the bowling, Shannon Gabriel has impressed with his pace and potency. As for spin, a lot will depend on how Sunil Narine turns up on the day.