Delhi Daredevils tasted their fourth victory in five games of the IPL 2012 to remain at the top of all the teams in the points table. The hosts defeated Deccan Chargers by 5 wickets at the Feroz Shah Kotla with Kevin Pietersen scoring his career best T20 score of 103*. Pietersen finished the match in style by bringing up the 2nd century of this IPL. He smashed 6 fours and 9 sixes to power Delhi Daredevils to a brilliant victory after being on the mat at 65 for 4 in 9.4 overs at one stage.

Helping Kevin Pietersen at the other end was Yogesh Nagar with an unbeaten 23 from 15 balls with 3 fours in an unbroken stand of 48 runs for the 5th wicket. KP without any doubts got the Man of the Match award.

Wonderful bowling spells from Morne Morkel and Shahbaz Nadeem has helped hosts Delhi Daredevils to restrict Deccan Chargers to 157 for 8 at the Feroz Shah Kotla in Delhi. Morne Morkel claimed 3 for 23 while left arm spinner Shahbaz Nadeem was even better with 3 for 16 in 4 overs. 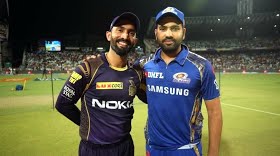 Sep 23, 2020: IPL 2020 5th match MI vs KKR Live match scorecard here. Mumbai Indians ended their winless jinx in UAE as they won the match handsomely by 49 runs. Rohit starred for Mumbai with 80 runs to power his team to a total of 195 and Bumrah, Pattinson picked up two wickets apiece to restrict the rusty Kolkata to 146.