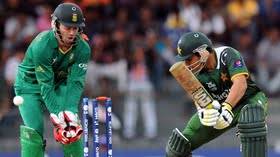 Pitch report :What was orginally a five-match series, has suddenly mutated into something much more. On the eve of the third ODI, the South African and Pakistan boards announced another series between the two, starting mere days after this one ends. Three more ODIs and two more T20s will take the number of limited-overs matches played between the two teams to 12 in the space of a month.

That probably means the pressure of the current series has been somewhat lifted because of the marathon contest it has become. That news is probably more welcomed by South Africa, whose limited-overs batsmen have failed to adapt to the UAE conditions, and look lost against Pakistan's spinners.
Though they will have Hashim Amla back for the remainder of the tour, which should add some stability, their middle-order worries are likely to remain. With Saeed Ajmal, Shahid Afridi and Mohammad Hafeez all continuing to cause problems, one of AB de Villiers, JP Duminy or Faf du Plessis need to step up.
A similar appraisal could be made of Pakistan's line-up, who have also been faltering in the middle. Umar Amin and Umar Akmal are yet to make meaningful contributions. In their case though, it is pace, rather than spin, that has got the better of them.
Both bowling attacks continue to impress, marking a change from the usual high-scoring gluts that this format can produce. But even that novelty is likely to soon wear off as the teams are going to be playing against each other till the end of the month.

Hashim Amla's ODI record against Pakistan will give South Africa a confidence boost. He has a batting average of 57.60, marginally higher than his 54.85 overall, and two of his 11 centuries have come against them.

Although Faf du Plessis has had a lean year, he has one record he can be proud of. He is second on the list of the most catches in ODIs in 2013 with 13 to his name, two behind Suresh Raina.