In a match constantly interrupted by rain, India A eased their way to a 75-run triumph against Bangladesh A in the decider on Sunday. The biggest worry for India A going into the final match was the form of their veteran batsman Suresh Raina

In a match constantly interrupted by rain, India A eased their way to a 75-run triumph against Bangladesh A in the decider on Sunday. The biggest worry for India A going into the final match was the form of their veteran batsman Suresh Raina. And things fell into place as far as that aspect was concerned. The southpaw hit a pleasing ton, and featured in a 116-run partnership with Sanju Samson – who contributed 90 off 99 – as India posted an impressive 297 for 6 on board. Bangladesh A never got themselves into any kind of position to chase the score. After a couple of rain interruptions, they finally finished on 141 for 6 after 32 overs, way behind D/L target of 217.

After Raina and Samson had blunted the Bangladesh A attack, the visitors’ chase began on a forgettable note. Soumya Sarkar played Dhawal Kulkarni on, as early as the second over. Not much later, Sreenath Aravind was successful in having Anamul Haque caught at mid-on. Play was interrupted after this, and when the match resumed, Bangladesh A were asked to chase 290 in 46 overs. There was no let-up in pressure as far as India A’s bowler were concerned. Rony Taulkdar registered his third failure as Aravind sent him back. 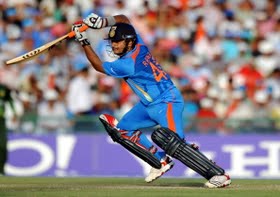 Kuldeep Yadav and Karn Sharma carried on from where the seamers left. There was brief resistance from Liton Das and Mominul Haque as they added 44 for the fourth wicket. But, it did not last long enough as Kuldeep sent back both of them in quick time – Das was the first to go, caught behind for 21, while Haque was dismissed after making 37. Sabbir Rahman came in and hit some sizzling strokes to give Bangladesh A something to cheer about. He was unbeaten on 41 from 52 balls, with four fours and a six, when rain had the final say. Bangladesh A were 141 for 6.

Earlier, India A were off to a poor start after winning the toss and batting first as Mayank Agarwal was caught behind off Shaiful Islam very early. Unmukt Chand could not rotate the strike, and with Samson also looking to get his eye in, Bangladesh A managed to put up some good resistance. Once both got set though, they began opening their shoulders. They added 82 for the second wicket when the skipper was dismissed, bowled by Arafat Sunny for 41 as he tried to cut one that came in. This brought Raina to the crease, and what followed was India A’s best phase.

Raina was in his true elements, jumping out of his crease, and lofting the bowlers for boundaries. Samson too followed his path as India A motored along. Both seemed set for centuries, but Samson was bowled on 90 with a ball that beat the batsman. Raina however carried on to complete his much-deserved hundred. He eventually fell for 104 in the last over, but by then had well and truly set the team on the path of victory.