After dishing out a last-ball thriller in the last league match, Mumbai Indians and Kolkata Knight Riders would square off against each other yet again at the Wankhede stadium on Wednesday

After dishing out a last-ball thriller in the last league match, Mumbai Indians and Kolkata Knight Riders would square off against each other yet again at the Wankhede stadium on Wednesday but the stakes are high now as it will be end of the road for the loser in the Indian Premier League.

Thanks to the changed format, the eliminator tie has become a sort of a quarter-final since the winner will then clash with loser of the qualifier-1 to earn a shot at the title match.

Kolkata were well-poised to hand Mumbai their fourth straight defeat in their last league match but allowed them to escape and record a thrilling last-ball victory. 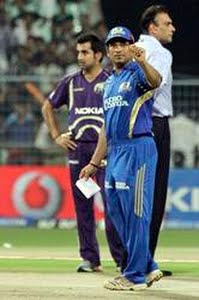 The Kolkata players, particularly Laxmipathy Balaji, who was hit for 23 runs in the last over which included a last-ball six by Mumbai's Ambati Rayudu, can forget that stunning change of fortunes in a jiffy.

Wednesday's game is a do-or-die match which would get nerves jangling and the team that shows iron grip on its emotions is likely to win the Eliminator.

Yusuf Pathan has not exactly scored big with 47 not out being his highest score in a tally of 257 from 14 games, but Mumbai would be aware of the damage the big-hitting Baroda man can cause once he gets going.

The new ball bowling of the Knight Riders has also been below par with Brett Lee not really pulling his weight (4 wickets in 11 games) while Balaji (10 wickets in 13) and Jaidev Unadkat (6 in 7) have been expensive.

Balaji's confidence would also be a bit low after the mauling he received from Mumbai's gangling left-handed batsman James Franklin, who struck four successive fours in the last over of the Tamil Nadu bowler to put his side on the threshold of a famous win.

Balaji, however, was backed by his captain Gambhir who said after the stunning last ball loss that the medium pacer would be back in his elements in the next game.

Kolkata have depended mostly on their spinners, especially Yusuf and Iqbal Abdulla who have grabbed 13 and 16 wickets respectively and also been economical for this format of the game.

The Wankhede track has afforded turn over the last few matches and the duo would relish bowling on it.

The gentle medium pace of Rajat Bhatia (8 wickets in 13 ties) has also been pretty handy for the Knight Riders.

If Kolkata have some problems to solve, Mumbai too have a few to tackle, the biggest of them being finding an effective opening partner to Tendulkar.

The team has tried out five batsmen but no one has clicked though Davy Jacobs appeared to have settled down in his role when he broke his thumb and had to be replaced.

In the last match Tirumalasetti Suman was tried but he failed for the second time in the key batting position and this has upset the balance of the team to some extent.

The team would again be looking forward to contributions from the trio of Tendulkar (477 runs), Rayudu (383) and Rohit Sharma (359) in batting.

Hard-hitting Kieron Pollard (140) and Andrew Symonds (135) have disappointed Mumbai but the blistering 45 not out in 23 balls by New Zealander Franklin, incidentally his highest in the IPL, has given them new hope.

Sri Lankan paceman Lasith Malinga (27 wickets) and Munaf Patel (17) were the kingpins till a few games ago before they were mauled at the death.

Malinga still remains Mumbai's best bet to give them early advantage while Patel, dropped for the previous game, is set to regain his spot.

Harbhajan Singh has been quite efficient if not spectacular in most matches and Mumbai would be expecting more from him against the likes of Yusuf Pathan.

Pollard and Symonds have been below par in bowling too to add to Mumbai's woes and they would be eager to see at least one of these big signings step up and perform in the make-or-break tie.

Tendulkar is aware that the stung Knight Riders are capable of storming their way back.