Broad took the first hat-trick at his home ground, removing MS Dhoni, Harbhajan Singh and Praveen Kumar, as India went from 267 for 4 to 288 all out. Broad's lethal spell read 5.1-2-5-5 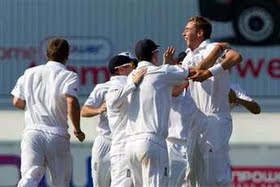 A sensational Stuart Broad imposed himself on the final session of a second straight day to help England storm back into the Trent Bridge Test, keeping India down to a lead of just 67. Broad took the first hat-trick at his home ground, removing MS Dhoni, Harbhajan Singh and Praveen Kumar, as India went from 267 for 4 to 288 all out. Broad's lethal spell read 5.1-2-5-5

Rahul Dravid was left stranded at the other end as England ran through the lower order, and then fell upper-cutting, looking for quick runs. He scored 117, his third century in the last five Tests, all scored at an age of over 38, and in testing conditions. Sreesanth and Ishant Sharma added 15 for the final wicket, but Ian Bell ended it with a special catch at short leg, catching a mistimed hook.

Rahul Dravid waited and waited for an unbeaten 83, VVS Laxman charmed his way to 54, and Yuvraj Singh timed his unconquered 43 well as India made their way towards a first-innings lead at Trent Bridge. The sun was out, the conditions eased off a bit, but they were still challenging enough to take the best out of the trio to deny England, who persisted with attacking fields almost throughout the first two sessions.

The two major building blocks were the grand old men of Indian cricket, who both batted at unusual positions thanks to injuries to both of India's first-choice openers. A poor shot first ball from the replacement opener yesterday had brought them together in the first over. The two survived a torturous hour yesterday before some blissful cricket on the second morning, adding 69 in the first hour and a half, 56 of those in boundaries. The partnership was much more crucial and beautiful than the 93 runs might suggest. India's batting order was a disarray, they were coming off a disaster at Lord's, and the conditions were demanding. The two responded with positive yet tight cricket.

Laxman played some gorgeous drives and mere pushes for fours through the off side, and Dravid kept exposing the vacant third man region. Laxman kept on pulling; it mattered little that the same shot resulted in his crucial dismissal in the second innings at Lord's. Dravid kept on leaving outswingers even marginally outside off, making sure he didn't repeat his crucial Lord's dismissal.