Chennai Super Kings all-rounder Shane Watson has done well for his new franchise CSK, scoring over 400 runs with the bat, including a hundred.

Chennai Super Kings all-rounder Shane Watson has done well for his new franchise CSK, scoring over 400 runs with the bat, including a hundred. Ahead of the first Qualifier against Sunrisers Hyderabad, Watson was all praise for skipper MS Dhoni.

"I'm very fortunate to have an opportunity at CSK like I have, to be able to open the batting throughout the tournament, to be able to bowl certain overs whenever MS needs me," Watson was quoted as saying in cricket.com.au report according to NDTV. 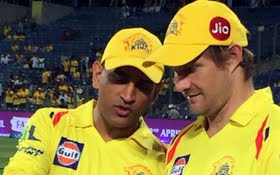 Showering further praise on skipper Dhoni, Watson said, "To be there for MS but also for my selfish point of view to be able to see how his mind works and how incredibly he reads the game, to be able to ask those questions has been great as well.

"Just his feel and intuition for the game, I've experienced that with a few incredible players I've played with, MS is certainly right up there," the former all-rounder further said in the NDTV report.

Dhoni has won two IPLs with Chennai whole Watson was a major part of the inaugural edition win for Rajasthan Royals in 2008.