Indian Premier League's (IPL) Hyderabad team will be called Sun Risers from next season, it was announced on Tuesday. Sun TV Network, which bought the Hyderabad franchisee recently, have chosen this new name for their team from IPL 6. 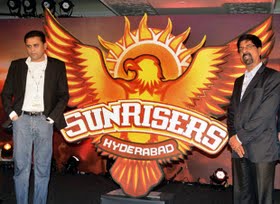 Sunrisers Hyderabad is a cricket franchise based in the city of Hyderabad that plays in the Indian Premier League.

Total no of Players 24

No of Indian Players 16

No of Overseas Players 8