West Zone powered by a superb century from middle order batsman Kedar Jadhav entered into the Final of the Deodhar Trophy 2011/12 defeating East Zone by 108 runs at the PCA Stadium in Mohali. The 26-year-old Maharasthra Cricketer smashed 114 in just 69 balls with as many as 17 fours and 2 sixes! 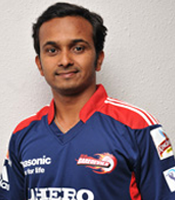 Kedar Jadhav’s knock helped West Zone to 342 for 7 after being asked to bat first by East Zone. Apart from Jadhav, Skipper Parthiv Patel, who opened the batting, scored 69 (from 76 balls with 9 fours) and Cheteshwar Pujara scored 70 from 85 balls with 6 fours. Bengal fast bowler Shami Ahmed bowled well for East Zone taking 4 for 62 in 10 overs.

In reply, East Zone got bowled out for 234 in 40 overs. Their innings did have some entertainment coming in from India discard Saurabh Tiwary who made a smashing 112 from 95 balls with 16 fours. Mumbai left-arm-spinner Iqbal Abdulla claimed 6 for 32 in 7 overs for the West Zone.