Sachin Tendulkar, Brian Lara, and Brett Lee are some of the legends that will be participating in the Road Safety World T20 Cricket Series.

It is a T20 cricket tournament which is scheduled to be played in India from 7 March and end on 22 March 2020. It will feature a list of cricket legends of the past who have proved their mantle in the game. The tournament was recently announced at a mega event in Mumbai. This tournament aims to promote road safety throughout the world. 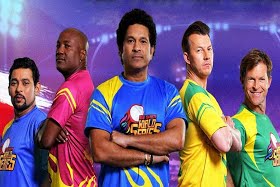 The Professional Management Group and the Road Safety Department of the Maharashtra government are organizing the league that feature five teams and a total of 11 matches to be played. Each team will play once against each other to reach the final on March 22 in Mumbai.

The opening match between India Legends and West Indies Legends at the Wankhede Stadium in Mumbai. All matches will start at 1:30 PM GMT, 7:00 PM IST.