First things first, this is not about whether Sachin Tendulkar should retire or not. Enough has been said and written about it. There is another bigger problem facing the Indian side and its selectors, and this pertains to the youngsters, who have been on the verge of selection for some time now.

First things first, this is not about whether Sachin Tendulkar should retire or not. Enough has been said and written about it. There is another bigger problem facing the Indian side and its selectors, and this pertains to the youngsters, who have been on the verge of selection for some time now. The case of Subramanian Badrinath should serve as a case study – how not to deal with a cricketer when it comes to selection. In spite of being on the verge of Test selection for a few years, he was given an opportunity to play in the XI only twice and since has been discarded. 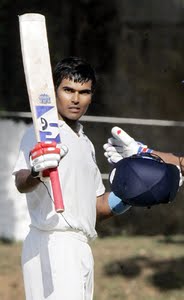 Badrinath was last picked for the series against New Zealand, after VVS Laxman pulled and retired in spite of being selected. The sad part was that the Tamil Nadu batsman wasn’t given a chance to play any of the two Tests and yet was axed. One of the reasons Badrinath isn’t considered as an asset to the Indian team these days is because he is no longer a youngster. At 32, he can only play on for another four to five years even if he is selected. While the batsman has been unlucky that he blossomed in first-class in an era where India’s middle-order was at its peak, and even the generously talented Yuvraj Singh couldn’t get in, it is still fair to conclude that Badrinath could have been given better treatment.

Unless something sensational occurs, there’s little chance of Badrinath making it to the Test team again. However, there is a definite lesson here for selectors over what is the right time to draft a youngster into the Test squad. If they wait on for a long time over a senior player who isn’t performing, they will only give rise to more Badrinaths. It is still early to call this, but Rohit Sharma seems in queue to be the next whose Test career could suffer owing to the fact that Indian cricket isn’t willing to look ahead.

Rohit hasn’t done himself any favours by consistently failing to deliver on ODIs in spite of having gained enough experience. It is equally true though that he has been unlucky not to have played a single Test in spite of having made his debut in the shorter versions back in 2007. India had an opportunity to give him a go in Australia when the big guns where underperforming game after game. But, M S Dhoni was happy playing the same eleven, and India almost seemed content losing the Tests 4-0. There was no guarantee of things being different had Rohit played in any of the Tests, but at least we could have given the Indians some points for trying something different.

Rohit is not the only batsman whose career could be affected severely by Indian cricket’s mindset of being averse of change. Manoj Tiwary is also yet to make his Test debut, and so is Ajinkya Rahane. Unmukt Chand has only just begun to knock on the door, but looking at the queue ahead, he could be in the waiting list for a few years too.